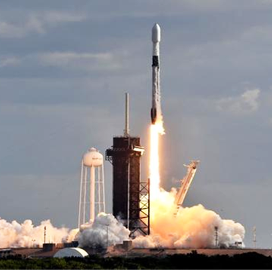 SpaceX has brought a classified satellite from the National Reconnaissance Office into orbit via the company's Falcon 9 rocket, CBS News reported Saturday.

Falcon 9 took off Saturday from launch pad 39A at the Kennedy Space Center in Florida and produced 1.7M pounds of thrust to ferry NROL-108 to the Earth's orbit. The payload is expected to join the low orbit considering the amount of the rocket's first stage propellant.

The launch marks the 26th deployment of the Falcon 9 rocket and the final mission for SpaceX in 2020. Of the 26 launches, one is a sub-orbital test flight. The company has now made 103 Falcon 9 flights since the rocket's first liftoff in 2010.

Prior to the mission, United Launch Alliance launched NRO's NROL-44 spacecraft through a Delta IV Heavy rocket after a series of technical delays.