The Malvern, Pennsylvania-based company said Tuesday that Porter, Verweil and Griffin, who is also a two-time Wash100 Award recipient, bring significant experience in commercial, civil and defense operations that will help Rajant in its research and development initiatives.

Griffin and Porter are also the copresidents of data analytics company LogiQ, which they cofounded after leaving the DoD in early 2020.

Griffin previously served as undersecretary of defense for research and engineering and held a chief technology officer role with responsibility over the DoD's R&D and prototyping initiatives.

His industry experience includes time as CEO of Schafer and Magellan Systems, as well as president and chief operating officer of In-Q-Tel.

Porter most recently served as Griffin's deputy undersecretary and was the first director of the Intelligence Advanced Research Projects Activity.

Verwiel served as sector VP and general manager at Northrop's mission systems segment with responsibility over its missile defense and protective systems division before retiring early this year. 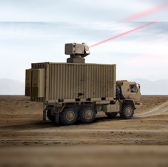