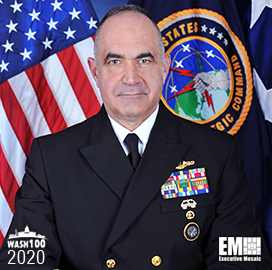 Executive Mosaic is honored to announce Adm. Charles Richard, head of U.S. Strategic Command (USSTRATCOM), as the newest inductee into the 2020 edition of the Wash100 for championing the nation's strategic deterrent force and advocating for new defense policies.

This marks Richard's first Wash100 award. Richard took charge of Stratcom in November as the successor to Gen. John Hyten, a two-time Wash100 awardee who now serves as vice-chairman of the Joint Chiefs of Staff.

As a former deputy commander of USSTRATCOM, Richard has brought his deep-rooted knowledge of the responsibilities of the command and its mission and is a champion for its continued role as the nation's strategic deterrent force.

“I am humbled to follow in the footsteps of a long line of great USSTRATCOM leaders and will strive every day to continue their legacy to take 21st-century strategic deterrence to the next level,“ Richard said during the Nov. 18 change of command ceremony.

Richard, since his appointment, has taken USSTRATCOM's mission and continued to grow defense throughout the year. In Feb. 2020, he proposed to Congress, stating that China is engaged in a troubling buildup of nuclear forces that could be used to wage regional conflict or to coerce nations in Asia.

“Competitors, such as China and Russia, are developing advanced capabilities to directly challenge our strengths across all domains,“ said Richard, citing that Beijing and its large-scale nuclear force modernization.

“China is advancing a comprehensive modernization program for the People's Liberation Army (PLA) and is building a robust, lethal force with capabilities spanning all domains, the electromagnetic spectrum and the information environment,“ he stated in prepared testimony to the Senate Armed Services Committee on Feb. 13. “These initiatives increase China's ability to project power further from its mainland and support their aspirations to impose China's will throughout the Indo-Pacific region.“

He noted that the goal of the force buildup is to “establish regional hegemony, deny U.S. power projection operations in the Indo-Pacific and supplant the U.S. as the security partner of choice.“

In addition to Richard's advocacy since his nomination, he previously commanded the Navy's submarine forces and helped ensure its superiority in the undersea domain during his tenure, developing his knowledge of the field.

In early November, he told the Naval Submarine League audience the SUBFOR team was crafting a new vision document that would reflect evolving missions and threats in the real-world setting, called Vision 20XX.

He stated that the vision document will be iterative and will constantly monitor changes in real-world operations and threats.

Richard said, “our ability to avoid detection, our stealth, is our greatest asset…this becomes more than simply controlling our radiated signatures in the acoustic spectrum. Electromagnetic becomes just as important, and I think the thing we have to add in is now our disturbance of the environment.“

In his address, Richard also noted that technology has rapidly changed, faster than the acquisition system can keep up, and the Navy may need to “break some plates“ to bring the latest and greatest to the fleet to win a high-end fight.

Specifically, he said, undersea command and control are unique and the Navy may need to be willing to overhaul that architecture. The Navy has used artificial intelligence and machine learning already, and DevSecOps is replacing the traditional Acoustics Rapid commercial-off-the-shelf Insertion (ARCI) model as the Navy needs more capabilities and on a faster timeline.

“I love ARCI. I know many of the people in here put together the ARCI model. It is revolutionary, they are going to build statues and name buildings after people ““ but ARCI is so last century, we have to go to the next step; DEVSECOPS is that,“ Richard said.

His previous flag assignments include time as Stratcom deputy commander, undersea warfare director at the Pentagon and deputy chief of Stratcom's joint functional component command for a global strike. The four-star admiral handled multiple submarine operations during his 37 years of Naval service.

Executive Mosaic congratulates Richard and the Stratcom team for their selection to receive the 2020 Wash100 Award. His commitment to address the command's strategic deterrence goals will be influential to the GovCon sector. 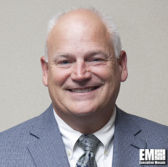 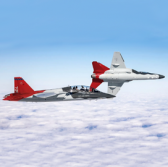