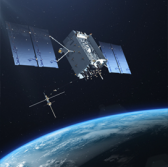 “In the coming days, GPS III SV01 will use its liquid apogee engines to climb into its operational orbit about 12,550 miles above the Earth,“ said Johnathon Caldwell, vice president for navigation systems at Lockheed.

“We will then send it commands to deploy its solar arrays and antennas, and begin on-orbit checkout and tests, including extensive signals testing with our advanced navigation payload provided by Harris Corporation,” Caldwell added.

The satellite, nicknamed “Vespucci,“ will broadcast the L1C civil signal intended to be compatible with Europe“™s Galileo and other international navigation satellite systems.

The Air Force granted the “available for launch“ status to the second GPS III satellite in August and expects the spacecraft to launch in 2019.

“By this time next year, we expect to also have a second GPS III on orbit and users should be receiving signals from this first satellite,“ Caldwell said.

The GPS III SV03-08 satellite has entered the assembly and testing phases.

The service branch initially ordered 10 GPS III satellites and awarded Lockheed a $1.36B contract in September to produce the 11th and 12th GPS IIIF satellites as part of the potential $7.2B GPS III follow-on program.